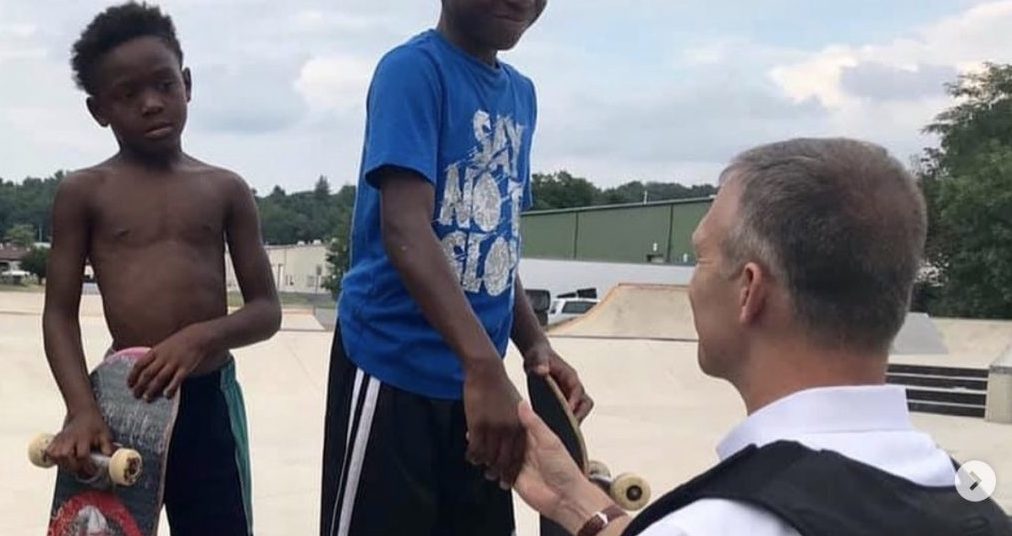 What is Congressman Scott Perry Afraid Of? Maybe More Than We Realize.

This photo of Congressman Scott Perry (PA-10) talking to young African-American children while WEARING A GODDAMN BULLETPROOF VEST may be the:

While it would be easy to assume the picture was photoshopped or otherwise altered, it appears on Perry’s official website. The level of political tone-deafness needed to think posting a photo of a United States Congressman standing next to two young African-American children was a good idea is almost unfathomable. The look on the kid standing at the far left pretty much sums it up:

Meanwhile, the Congressman doesn’t seem quite as concerned in another picture posted on his Instagram. Can’t imagine why…

The Congressman was apparently accompanying police officers on a ridealong, hence the bulletproof vest, but how did someone in his office not realize how poorly the photo would play? More likely they were like, “whoa- we’ve got a photo of Scott Perry with two real live black people– throw that mofo up on Instagram stat!”

If a Congressman Holds a Town Hall Meeting with a Waiting List but only 30% of the Venue is Full, Does it Make a Sound?

This photo faux-pas comes on the heels of last week’s town hall meeting Perry held in his Congressional district, which includes the city of Harrisburg and the surrounding suburbs. The town hall, Perry’s first in pretty much forever (actually 2017), featured some extreme measures restricting access for constituents wishing to ask questions and presumably voice their displeasure with their elected representative.

The kicker? The fire department hosting the town hall holds 200 people, but despite the “waiting list,” only 60 people ended up being allowed inside. I’m not versed in Republican math, but I guess 30% of capacity must equal a full house. Kind of makes you wonder how accurate they are when they say the country has too many immigrants.

Perry spokeswoman Brandy Brown cited the advice of the U.S. Capitol Police and House sergeant at arms to “ensure the safety of those present.” A more likely scenario is Perry staffers screened the applicants by political affiliation to determine who would and wouldn’t be allowed inside, which happens to be uber-illegal by the way. But let’s take the good Congressman at face value for the fun of it. The security at his town hall, coupled with the bulletproof vest, beg a relatively simple question:

What exactly is Scott Perry afraid of, anyhow?

Lest anyone need a refresher, the guy has a legit military record, including flying 44 missions and accruing nearly 200 combat flight hours during Operation Iraqi Freedom. His military service began in 1980 when he enrolled in the Army National Guard through his 2016 retirement as a Brigadier general. The point is that Scott Perry should have no trouble handling a couple of kids on the playground or some angry old ladies at a town hall.

So again, what is he afraid of? Is the 10th Congressional District of Pennsylvania really so dangerous that he needs Capitol Police protection and bulletproof vests?

Maybe Scott Perry is just a big scaredy-cat, or perhaps it’s something more profound. Perhaps he has some bizarre set of phobias that we don’t know about; and if so, are there anymore we should know about?

Here are a few more phobias that Scott Perry may be suffering from:

Numerophobia- the fear of doing math or dealing with numbers. Given that Perry voted for Donald Trump’s crazy, “screw the middle class” tax cut, this one may be serious.

Ephebiphobia- a fear of teenagers or adolescents. When you need a bulletproof vest to talk to two adolescents, you can probably skip the formal diagnosis and seek treatment immediately.

Aerophobia- the fear of fresh air or the movement of air. Perry’s dismal record on environmental issues, as well as his totally predictable denial of climate change, makes this one a no-brainer. Studies suggest blowing or fanning air on a person with aerophobia can trigger muscle spasms and an “intense startling reaction.” Someone should try it at his next town hall, which will probably be held approximately 50 years from now.

Hippopotomonstrosesquippedaliophobia- (it’s a real word) the fear of, ironically, big words. Relatively safe to assume all the Republicans in Congress have this one to some degree.

Chorophobia- the fear of dancing. Considering that he would probably be the whitest white guy ever to hit the dance floor, society may have dodged a bullet here.

Allodoxaphobia- the fear of opinions. Go back and re-read about Perry’s “security measures” to keep people out of his recent town hall, and the phobia practically diagnoses itself.

Uranophobia- the fear of heaven. Finally, some good news! Conquering this phobia is simple. By continuing to behave as a walking punchline instead of a member of the United States House of Representatives, heaven will be so unattainable that Scott Perry will have no reason to fear being allowed inside. 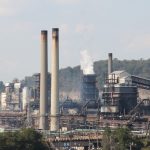 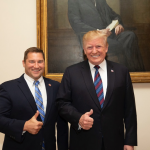