One of the cardinal rules for Thanksgiving dinner in recent years is to avoid talking about politics at family gatherings. In fact, the concept of the racist Drunk Uncle is now equally identifiable with Thanksgiving as cranberry sauce, with the common denominator being that nobody wants to put either of them anywhere near their mouth.

But if you’re looking for some cutesy Buzzfeed-style garbage about “navigating politics at Thanksgiving”, look elsewhere. This year, with some notable exceptions we’ll discuss shortly, you need to talk about politics with your family at Thanksgiving. Here’s why.

Not only is America now more divided than any time in recent history, but our ability to pick and choose our news sources based on our political biases also leaves us righteously indignant that we know what we’re talking about and the other side is Fake News. So basically, we all use the internet as a way to validate what we know about the world, which – let’s be honest – makes us all insufferable jerks on occasion.

Historically high turnout in the 2018 Midterm Elections clearly proves our political woes are not solely rooted in apathy, and the closeness of many of those races equally proves we’re all over the place in our collective ability to process the incredibly volatile political roller coaster we are collectively experiencing. Whether you’re sitting on the left or the right side of the train, we are all on this Hot Mess Express together.

So you’re probably thinking, “Why should I have to talk about politics at Thanksgiving? Can’t I get a day off to eat turkey and pie?”

Sorry, snowflake. Here’s the reason. Americans need to learn how to talk about politics again, and where else is that conversation going to take place? The workplace isn’t the proper environment for a multitude of entirely legitimate reasons, and some friendships just aren’t designed to have that conversation. Simply put, you can’t pick your family, which means you have a little latitude you don’t have in other groups and power structures.

There is also a not-so-subtle historical parallel here. If the Native Americans and the Pilgrims could sit down and share a meal without stabbing one another with ears of maize (that’s what they called corn back then), we should be able to eat some turkey, ignore some green bean casserole, and talk about real issues impacting our collective lives before falling asleep on the couch watching football. Pro Tip: If you’re going to take this approach, do not assign people to be Pilgrims or Native Americans. Nothing good is coming from that tactic.

But above all, you need to approach this conversation not as a debate or an opportunity to show off or humblebrag, but as a listening tour. The goal here is to talk to people, not at them, but more importantly, to listen. Seriously. Your Thanksgiving dinner table is not the floor of the goddamned Roman Senate, so leave the high-minded theatrics at home.

What if Your Racist Uncle isn’t Actually Racist?

Perhaps the best way to approach the discussion in your mind is by asking yourself a simple but serious question.

What if your “racist” uncle isn’t really racist, but holds some legitimate political beliefs that led him to buy what Donald Trump was selling back in 2016? Simply labeling someone who subscribes to Trumpism as a racist or an idiot is far too easy an excuse to dismiss their thoughts or experiences.

If we are going to care about immigrants trying to gain access to the American Dream thousands of miles away, we need to care about the people four feet in front of us at the dinner table. If you can’t do that, then you need to check your privilege and realize that you are in no small way as much of the problem as anyone else.

Something happened in your uncle’s life to shape his political beliefs, so find out what that something is. Many older white men and women, especially Christians, feel threatened by the shifting hierarchy which will likely dethrone them sooner than later. Others are more worried about economic stability and the appeal of authoritarianism in a world they find increasingly difficult to comprehend. And yes, some are just sexist, racist, or both. You’re always going to have some legitimate bad apples just waiting for the dog-whistle to come out of the woodwork, but they are thankfully the exception, not the rule.

Anyone who wants to be a part of shaping our country’s future must learn to identify and understand these underlying pressure points because only then is any sort of compromise remotely possible. Merely trying to shove your socialist, Antifa, millennial, hippie worldview down peoples’ throats is just going to cause their fear to intensify and harden their position. A failure to listen and understand will almost certainly turn older Trump voters into political doomsday preppers.

One great way to spark a conversation is bringing up one of the fresh faces of the Midterm Elections. Talk about Beto O’Rourke and how he played air drums to “Baba O’Reily” by the Who in a fast food drive-thru after his debate with Ted Cruz (which has the added bonus of being a song your uncle definitely knows and probably likes). Talk about how you heard a speech from Georgia Gubernatorial candidate Stacey Abrams about how hard it is for many people to vote. Talk about how cool it is to see Alexandria Ocasio-Cortez giving people real-time insight about the inner workings of Congress as part of her real-life Latinx remake of “Mr. Smith Goes to Washington.” Make it about people, and talk about the things you enjoy or admire about them. Pump up your team instead of talking trash on the opposition.

Seriously- how can you not watch Beto crushing the air drums without smiling?

Why Exactly Am I Subjecting Myself to This, Anyhow?

The good news is there is a real chance to effectuate change going into 2020. The numbers show that many people are not nearly as bullish on Trump anymore, mainly because seeing Trumpism play out in real time is forcing them to ask some hard questions about whether this is what they signed up for in 2016. And let’s not kid ourselves; Donald Trump is getting crazier and crazier with each passing day, with no end in sight.

But the key isn’t yelling “I told you so” and popping a pink knit pussycat hat on your uncle’s head. Your job is explaining why so many of the policies of Trump, Mitch McConnell, etc. are royally screwing up your life.

Your uncle probably never has to deal with an avalanche of student loan debt or insanely high health insurance costs. He doesn’t understand why you can’t just buy a house in the suburbs like he did when he was in his mid-twenties. And why should he? He’s busy busting his hump in a job increasingly threatened by automation, outsourcing, and the threat of being replaced by someone far younger. He’s terrified that his 401(k) isn’t nearly enough to provide for his own family after retirement.

In short, your uncle is afraid of becoming a Wal-Mart greeter at age seventy, and the only thing he’s more fearful of is talking about it because it’s not something he’s particularly proud of or enthusiastic about admitting to his family (or himself).

If one of the primary purposes of a family is to provide support in times of need, then we owe it to ourselves to get past the yelling and name-calling. By putting a face on “the other side,” the problems become far more real than they sound on talk radio and cable news. As the old proverb goes, when something happens to the guy down the street, it’s a shame; when it happens to you, it’s a tragedy.

Thanksgiving Rules of Engagement (or Disengagement)

If you do choose to initiate a real conversation about politics at Thanksgiving, there are some hard and fast exceptions you need to keep in mind.

So What Have We Learned Today?

Talking politics with your family at Thanksgiving probably fails to fit anyone’s definition of festive, but it’s a vital step in healing the political divide that has come to define our nation. Consider this- we just went through a bruising, exhausting Midterm Election, but that’s going to feel like a heartwarming basic cable Christmas movie compared to the looming clusterfuck that is the 2020 Presidential Election.

And who knows? Maybe if enough of us can learn how to listen instead of shout, we might actually have something to be thankful for.

NOTE: The uncle described here can be an aunt, cousin, grandparent, etc. For the record, the uncle I’ll be eating Thanksgiving with has zero of the qualities mentioned here, plus I’m an in-law, so I’ll be keeping my mouth shut when I’m not eating. 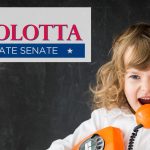 No, Senator Bartolotta. We Will Not Cease or Desist Until You Provide Answers or Evidence. 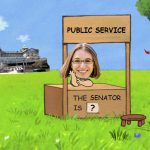