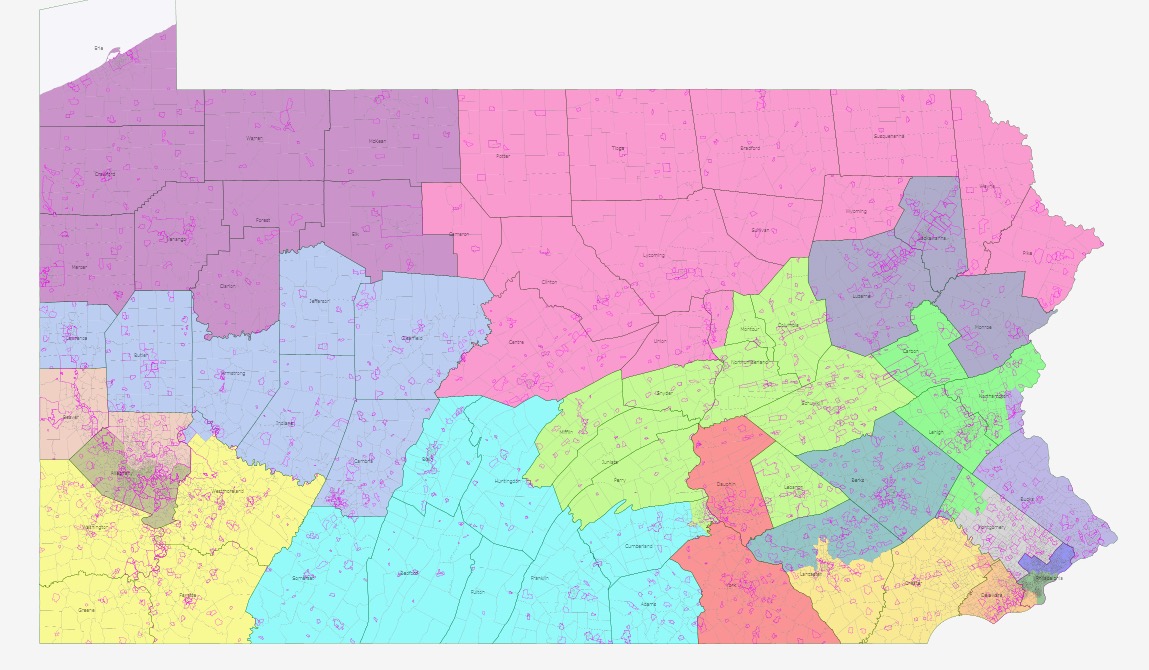 This week, the Pennsylvania Supreme Court officially acknowledged what anyone with a pair of eyes already knew; the state’s eighteen Congressional Districts are drawn based on partisan politics and are therefore unconstitutional. It was big news to be sure, especially with the 2018 Primary Elections looming this spring.

So what happens now? The Court mandated that the State Legislature draw new Congressional maps by February 9, only a few weeks from now. Congressional maps are a regular bill that must pass the State House and Senate (both Republican-controlled), and then be signed by Democratic Governor Tom Wolf. If the Legislature fails to deliver by February 9, then the Supreme Court will draw their own maps. For the record, Democrats hold a 5-2 majority on the Court.

It took all of about three seconds for Senate GOP leaders to announce their intention to seek a stay from the U.S. Supreme Court, but there is no guarantee the tactic will work. Because the process of drawing Congressional maps is solely a function of state law, the grounds on which to get the federal courts involved is nebulous at best. Watch as Drew Crompton, Chief of Staff to GOP Senate Leader Joe Scarnati, throws a veritable hissy fit in response to the Court’s ruling (courtesy of Raging Chicken Press):

As someone who was there during the vote when the unconstitutional maps were drawn and voted on, I feel compelled to note that much of what Crompton is complaining about is soaked with overwrought crocodile tears. His claim that it would take too long to move a bill through the legislative process is hilarious to anyone who has witnessed how the Legislature actually works. All the leadership needs to do is do a “gut and replace” amendment to a bill already in the pipeline; this original bill becomes the “vehicle” for the new language. It happens ALL THE TIME.

The real reason Republican legislative leaders are pitching a fit is that the Supreme Court is forcing them to do something extremely difficult- actually legislate in good faith, and on a deadline to boot.

You need to understand that GOP leaders in the House and Senate have a horrific track record of working together to get things done, even though they’re all members of the same political party. This is largely due to the fact that House Speaker and 2018 Gubernatorial Candidate Mike Turzai is well-known for reneging on deals, and the Senate GOP doesn’t take kindly to having anyone dictate terms to them on anything. (By way of example, I was thrown out of an empty elevator in the Capitol once because it was to be available for Senate leadership when they left the floor- and this is when I was a sitting State Representative.)

With Turzai in the House and Scott Wagner in the Senate, both of whom are actively running for governor, the only consensus among the GOP may be that they need to find a way to make Governor Tom Wolf look bad no matter what. Wolf is in a pretty interesting position because he can veto any new maps the Legislature sends him prior to the February 9 deadline. Common sense would dictate that everyone should get into a room and hash things out, but that won’t happen because that’s just not how things work in the State Capitol. Remember, this is the gang that for the first time ever couldn’t get a state budget passed last year. Results are not their collective forte.

So the most likely gripe from the Legislature will be that three weeks isn’t enough time to get a new map drawn, which is 100% skullduggery. How do I know? It’s easy- I drew a new set of Congressional districts last night, and it only took about two hours.

Anyone who has experienced the redistricting process knows all about a little website called “Dave’s Redistricting App.” I don’t know who Dave is, but I do know he created a remarkable (and free) tool for drawing districts for state and federal legislative seats. I also know that in the weeks and months of horse-trading leading up to redistricting, just about every computer in the State Capitol was being used by legislators to draw up their dream district. In fairness, there are much worse things they could be doing online, so let’s just leave it at that.

Dave’s Redistricting App isn’t just some coloring book for politicians; it uses Census data and a variety of tools to draw incredibly detailed legislative districts, all the way down to individual voting precincts. So how did I do? Let’s take a look.

First, I want to lay out the criteria I used in creating this map. My main goal was to draw common sense districts without any political motive in mind whatsoever. I prioritized keeping counties whole where possible, and I made sure to keep the population of each district within a variance of 10,000 voters from the 705,000 voters per district. I also tried to make sure population centers, but not necessarily cities, were spread out in a way to allow each district to have somewhat of an anchor.

Here’s what I came up with:

By comparison, here is the map that was thrown out by the PA Supreme Court for gerrymandering: 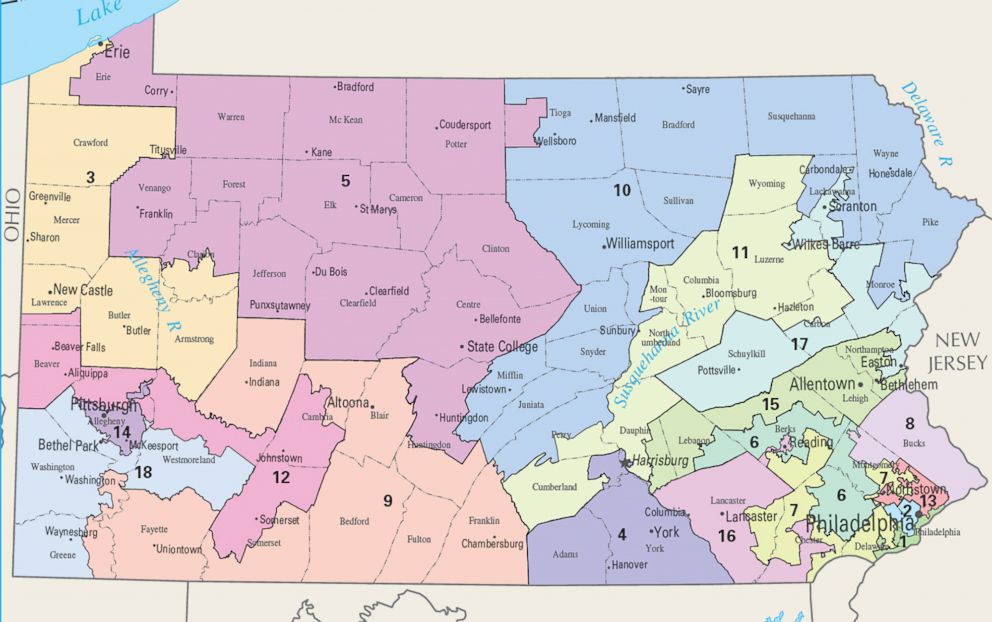 Again, my map was done in about two hours with no political considerations whatsoever. I drew the maps and figured out the political leaning after the fact. Let’s take a look and see how the districts would shake out using the Cook Partisan Voting Index for each new district (also known as its PVI), which is so generously provided by Dave’s Redistricting App. The score predicts the difficulty for a candidate in each district based on past voting results. For example, if a district has a PVI of R+9.5, then it is expected to lean Republican by 9.5% in the upcoming election.

Under this proposed map, the Republicans would have a 12-6 advantage in seats; however, 4 of the 12 Republican districts would have a PVI under 4.0, which means they could easily be swing districts for the foreseeable future.

This district would lean slightly Republican, but would hardly be a slam dunk. 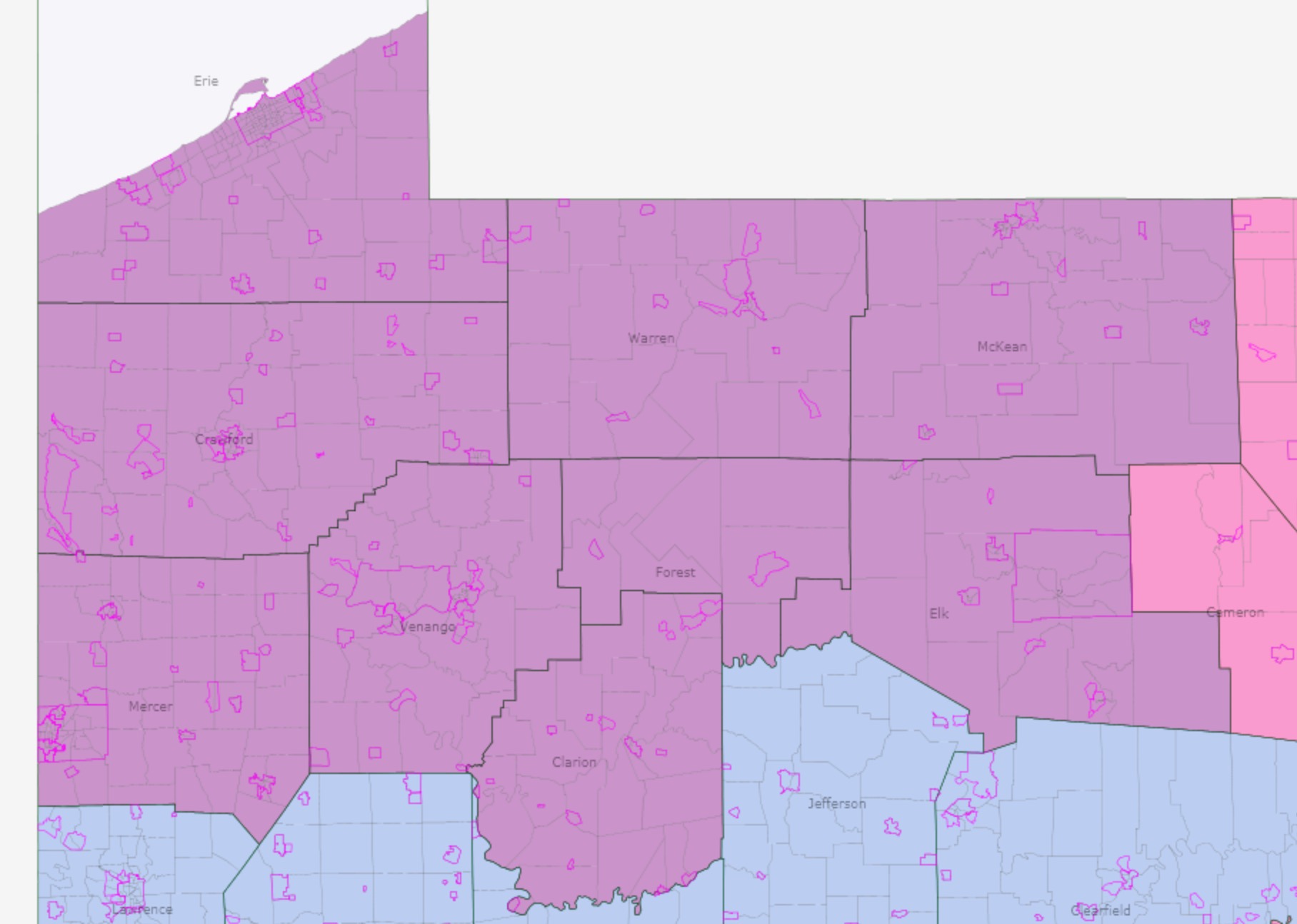 This would be a long shot for a Democratic candidate. 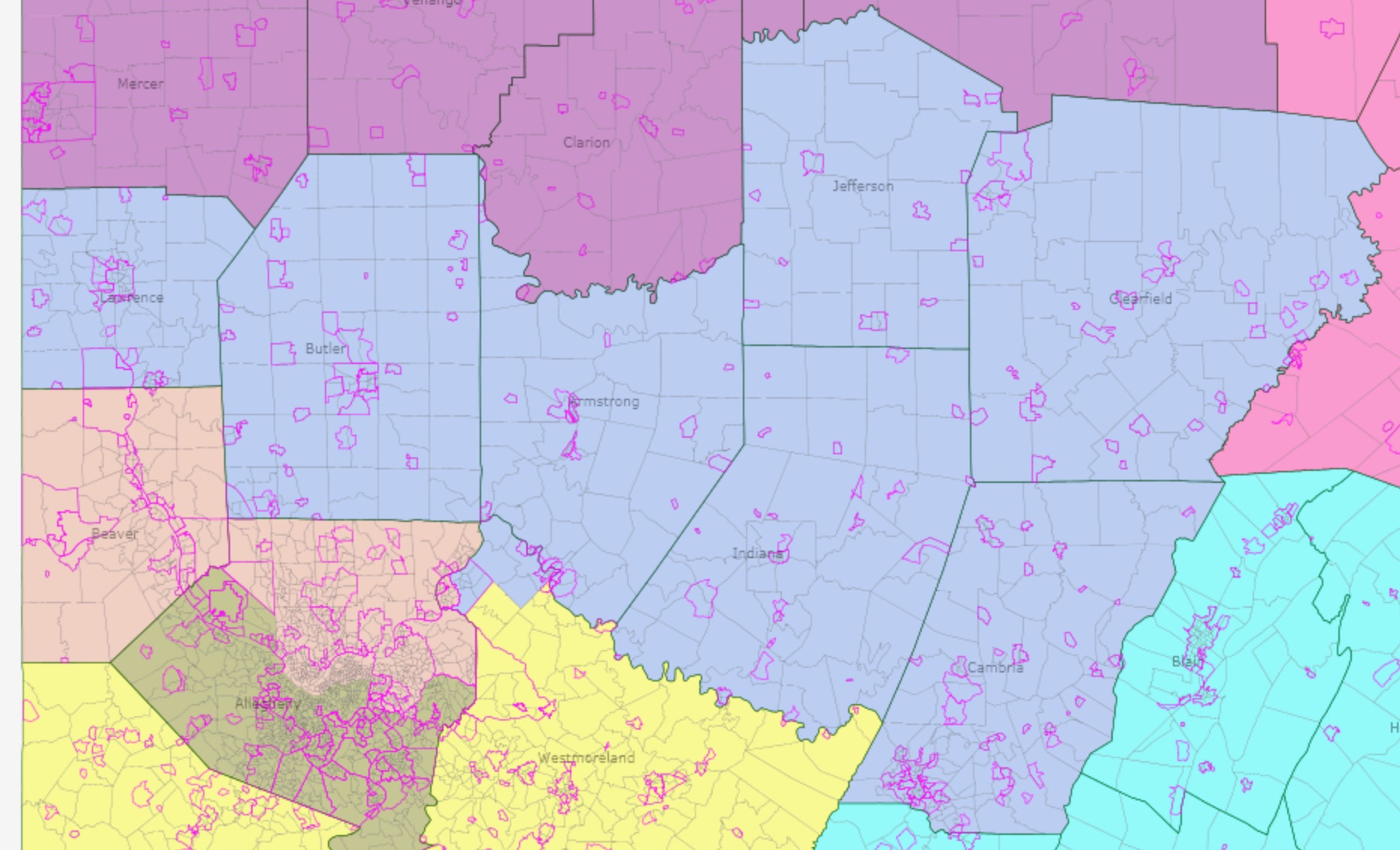 I made a conscious decision here to split Allegheny County, as well as the City of Pittsburgh itself, between two districts. My reasoning is that the city would benefit by having two members of Congress, plus from a political standpoint, no candidate could focus their campaign on just the city or just the suburbs. 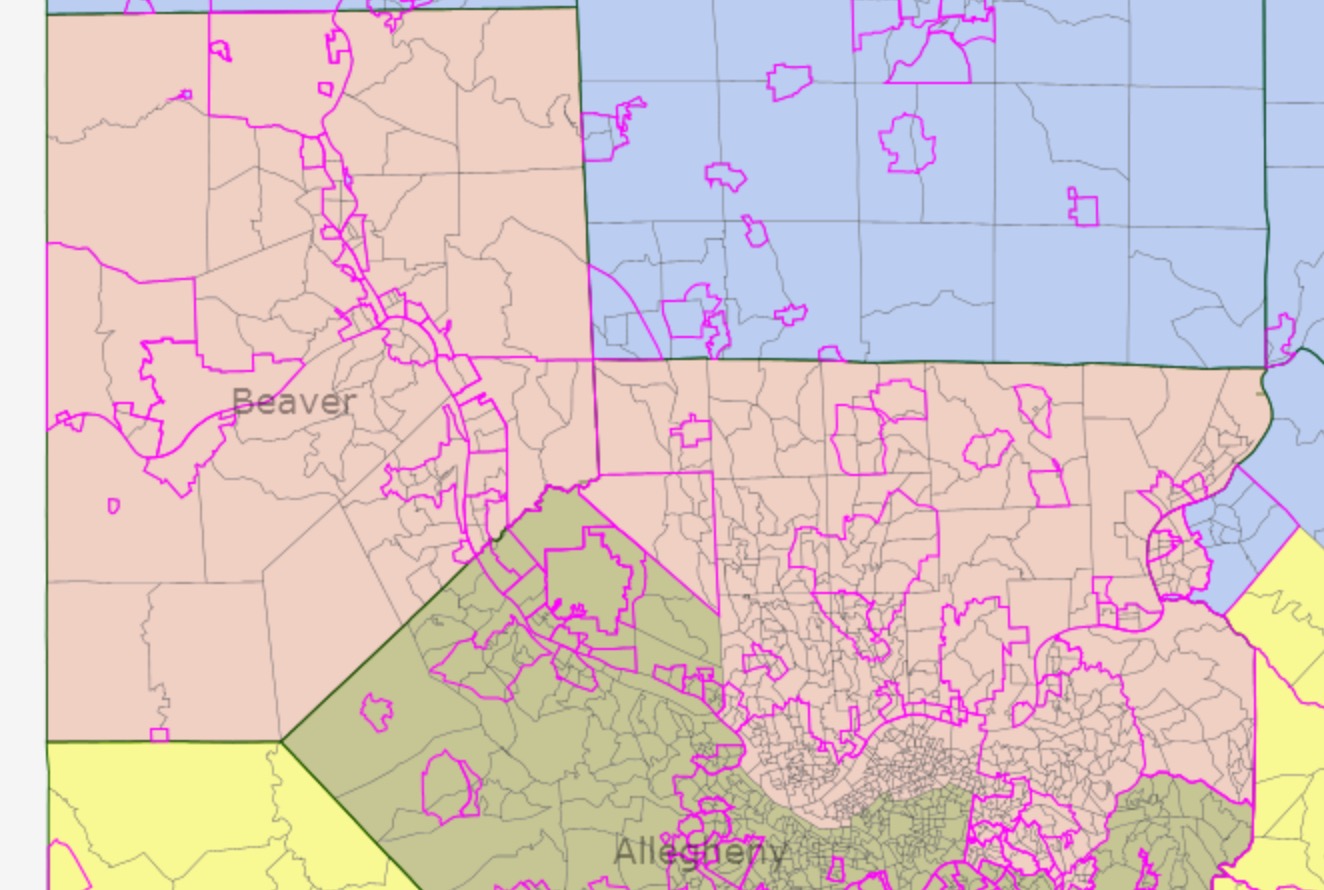 This is the remainder of Allegheny County. The district certainly leans Democrat but is not impossible for the right Republican candidate. 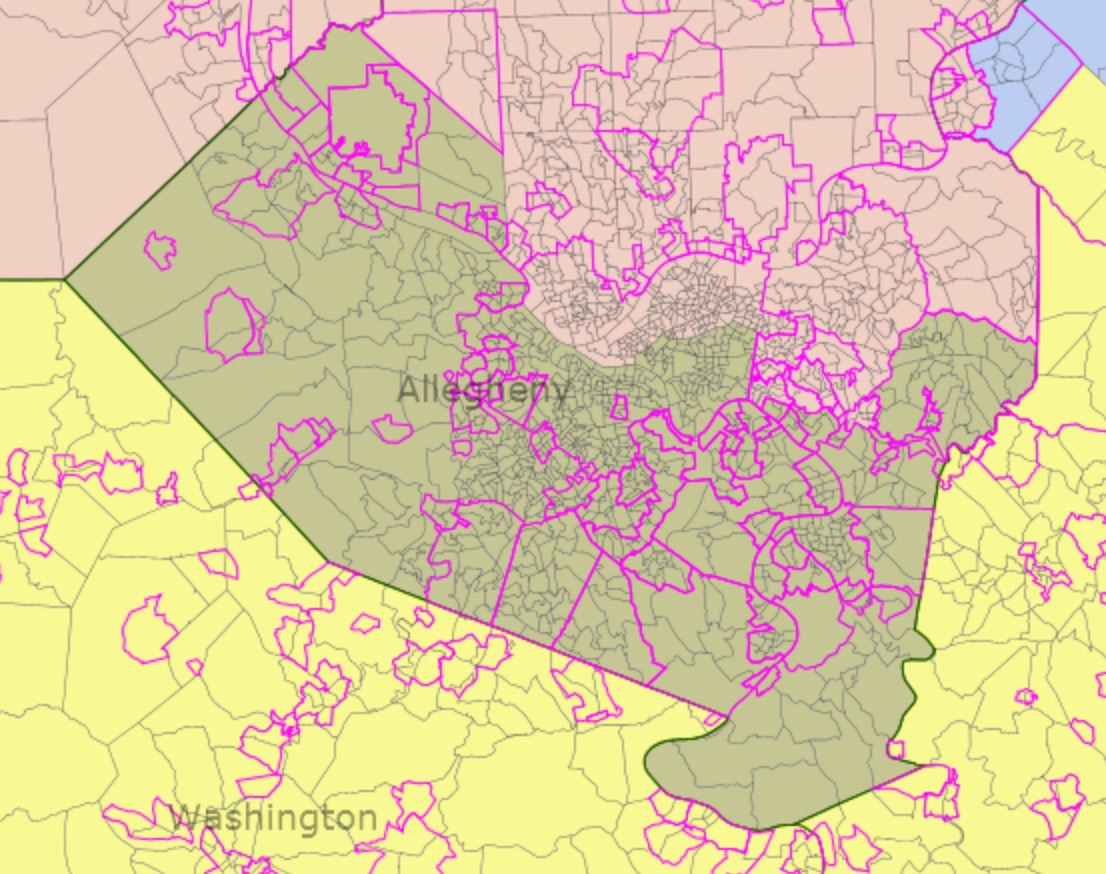 This district (which is where I happen to live) is the political result of “Southwestern PA Democrats” consistently voting Republican in recent years, capped by the strong showing for Donald Trump in 2016. The only reason a small part of Westmoreland isn’t included is to balance the populations in the districts. 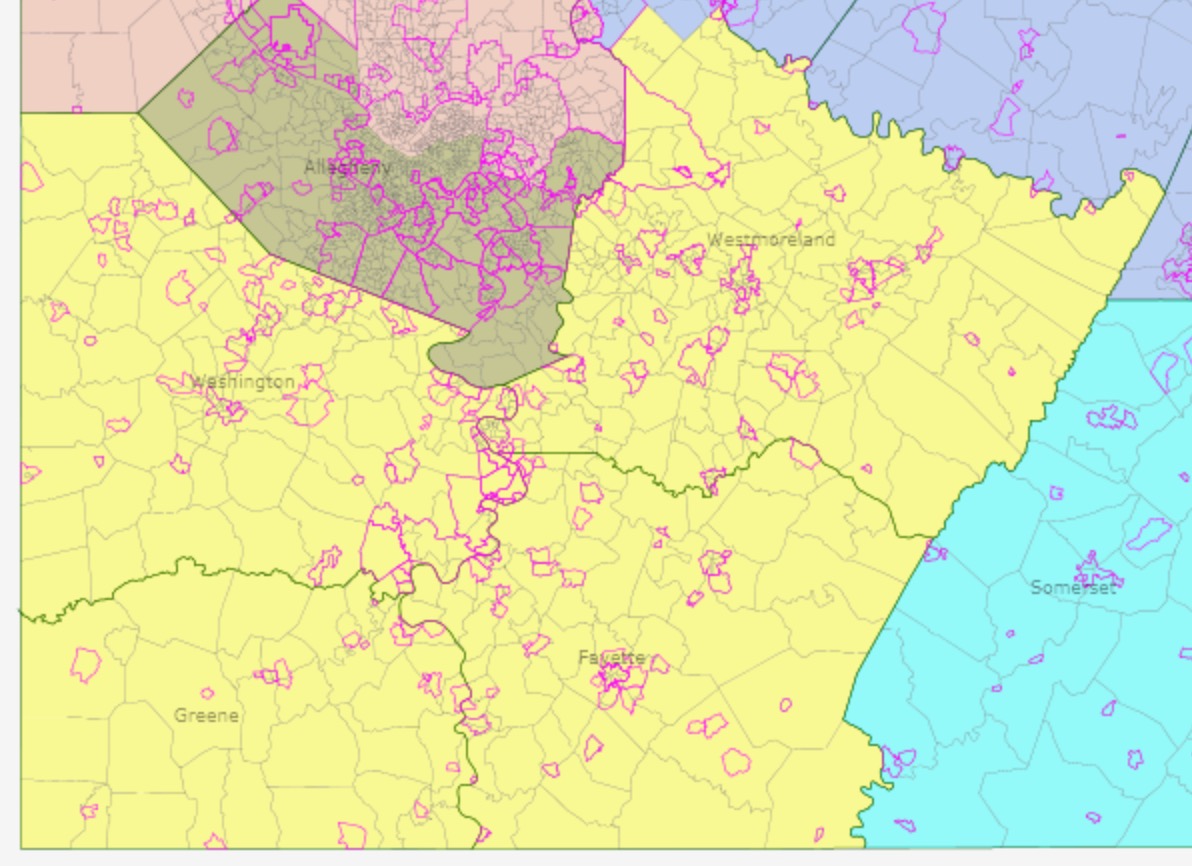 This district is exactly what it looks like. Big and Republican. Not much more to say. 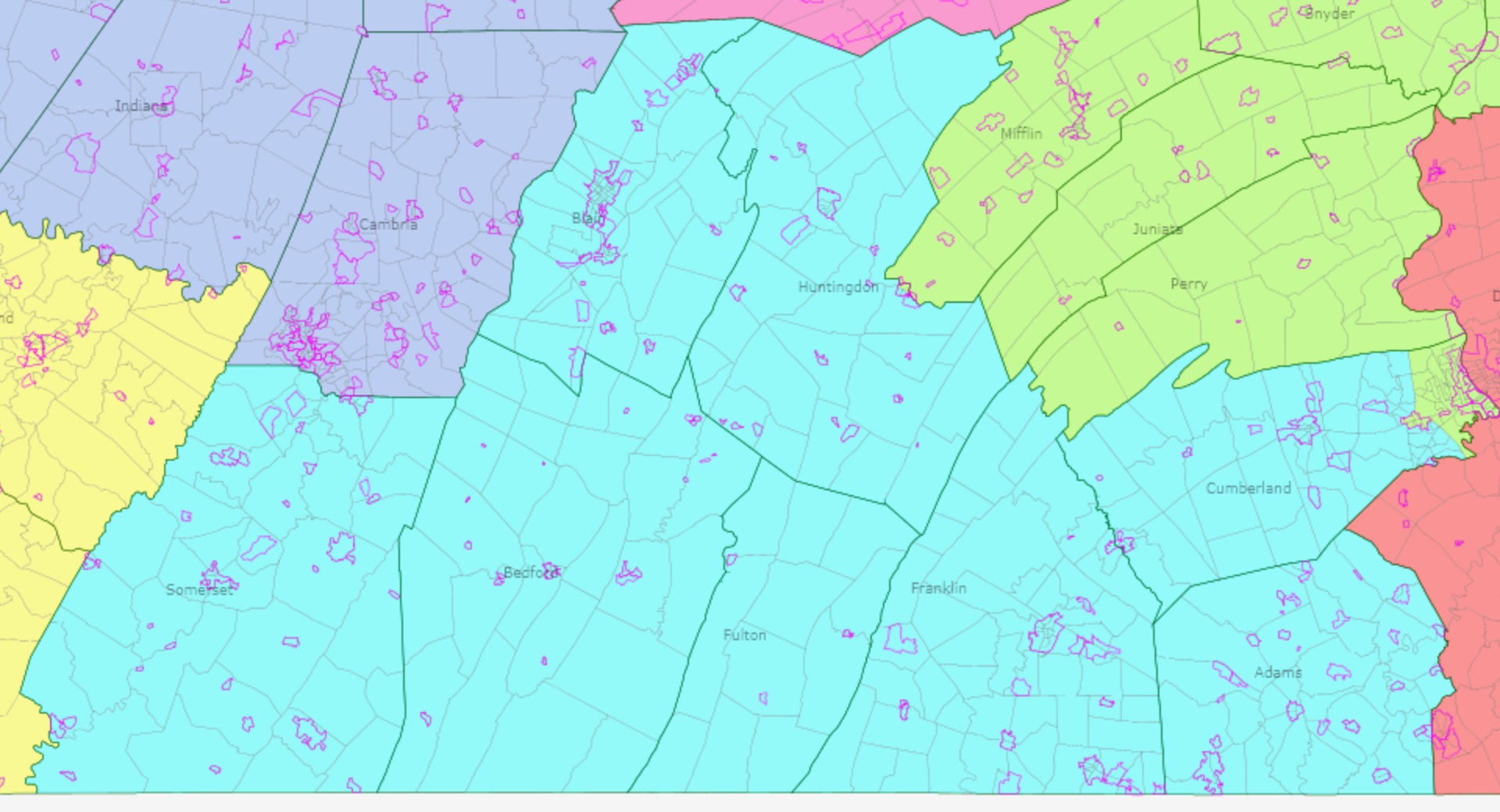 This district would be impossible for a Democrat, but would likely see some knockdown drag out Republican Primaries.

This district would pretty much always be competitive, and there’s nothing wrong with that. 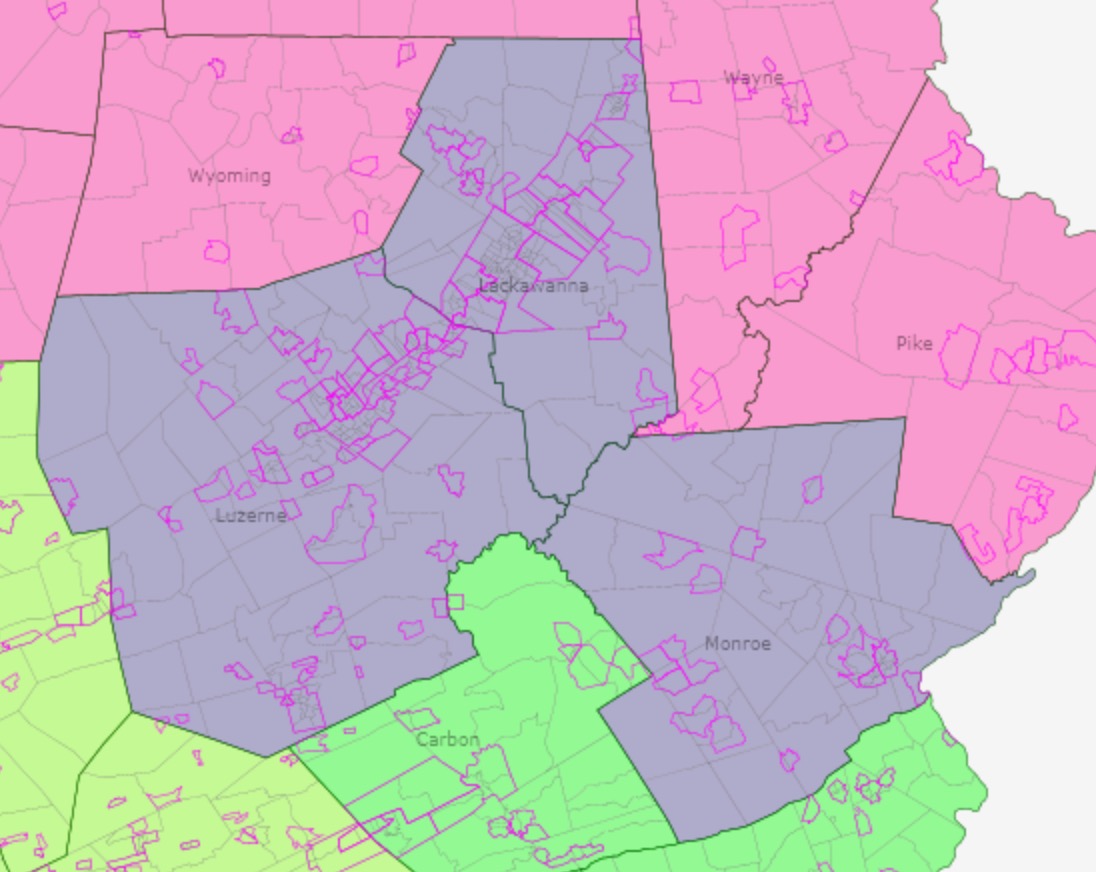 Drawing Congressional districts is like doing a jigsaw puzzle; you start with the borders and work your way in from there. This district reflects the need to even up the population numbers in the middle of the state, hence the portions of Cumberland and Northumberland Counties. 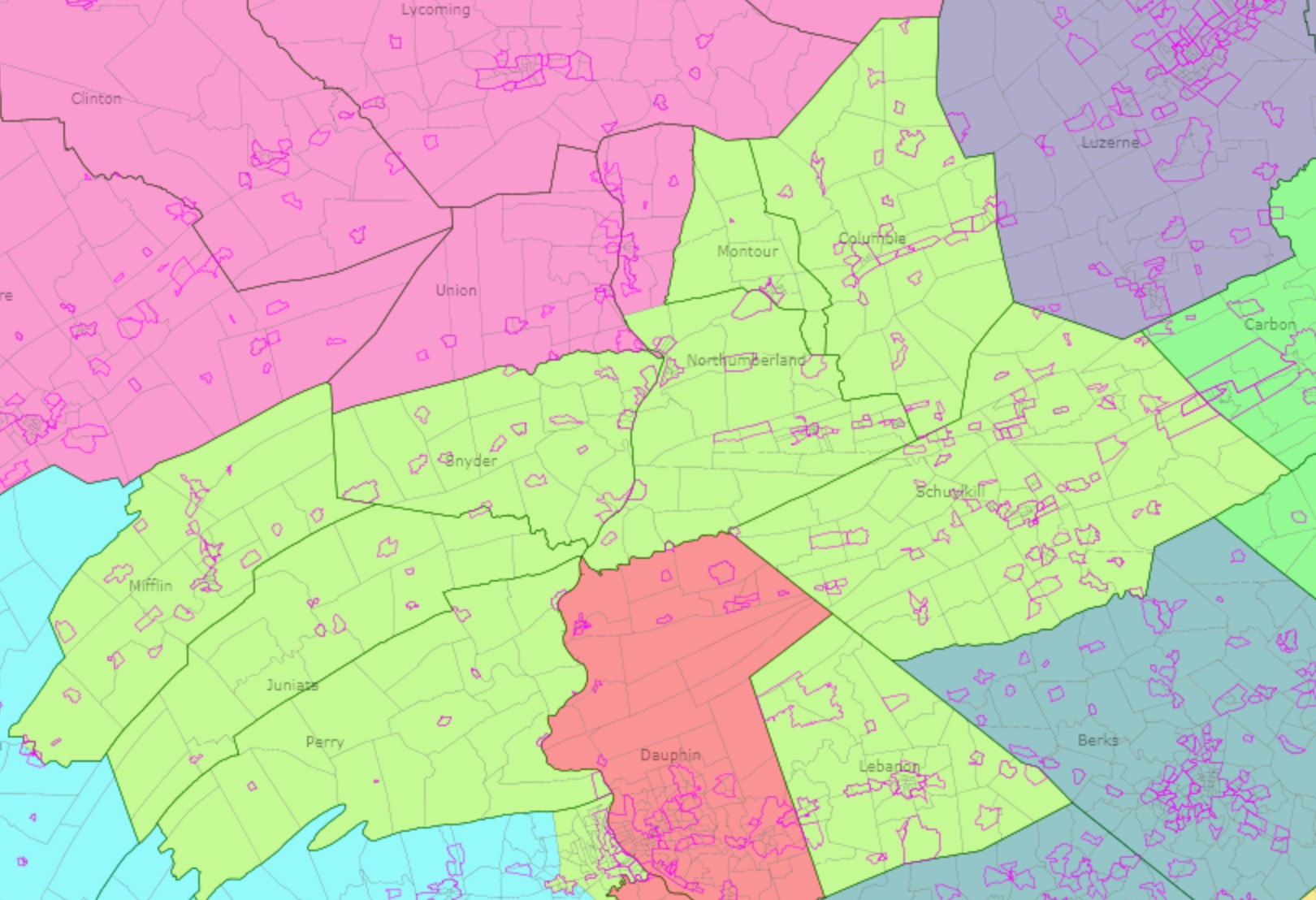 This is an interesting district because it contains the state capital of Harrisburg, which is obviously a hotbed of political activity. Would likely be a swing district for the foreseeable future. 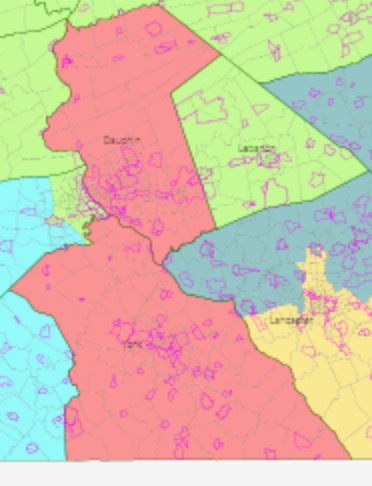 The only reason a piece of Montgomery County is in this district is for population balance; it’s really a Lehigh Valley seat. 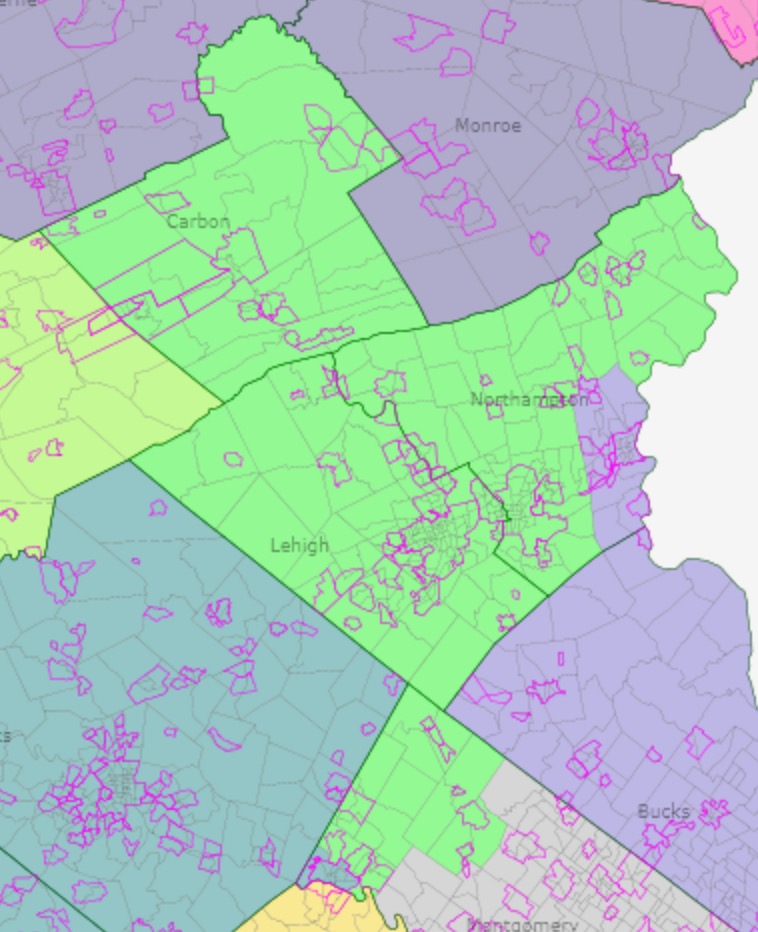 As we head into the “Collar Counties” around Philadelphia, the goal was to give each county its own seat; in some cases, this wasn’t possible because the population was too large, but that was the intention and I think it still works. 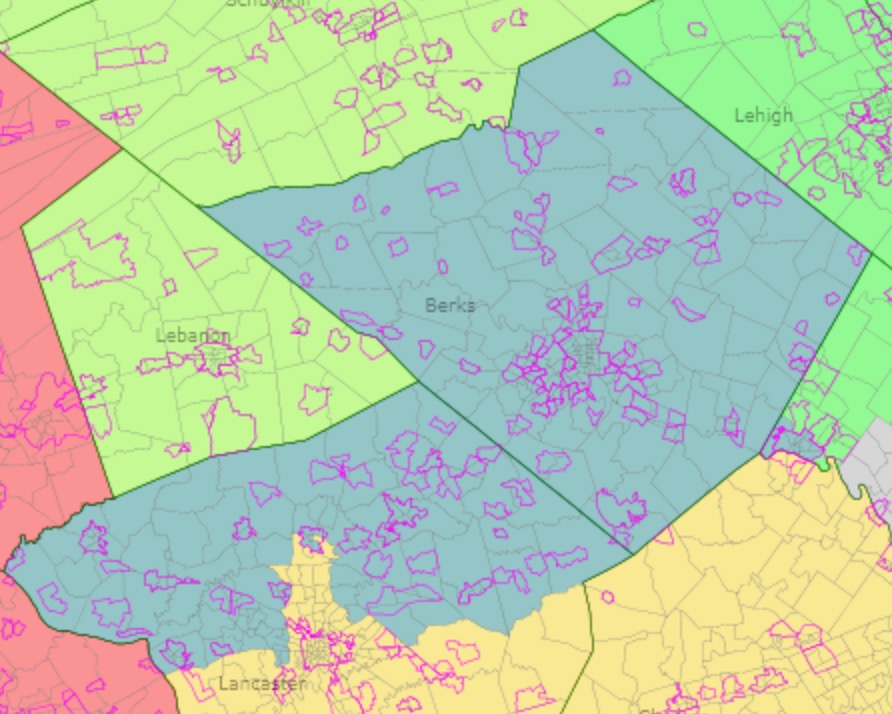 Again, another perpetual swing district, which is indicative of the Southeastern corner of the state. 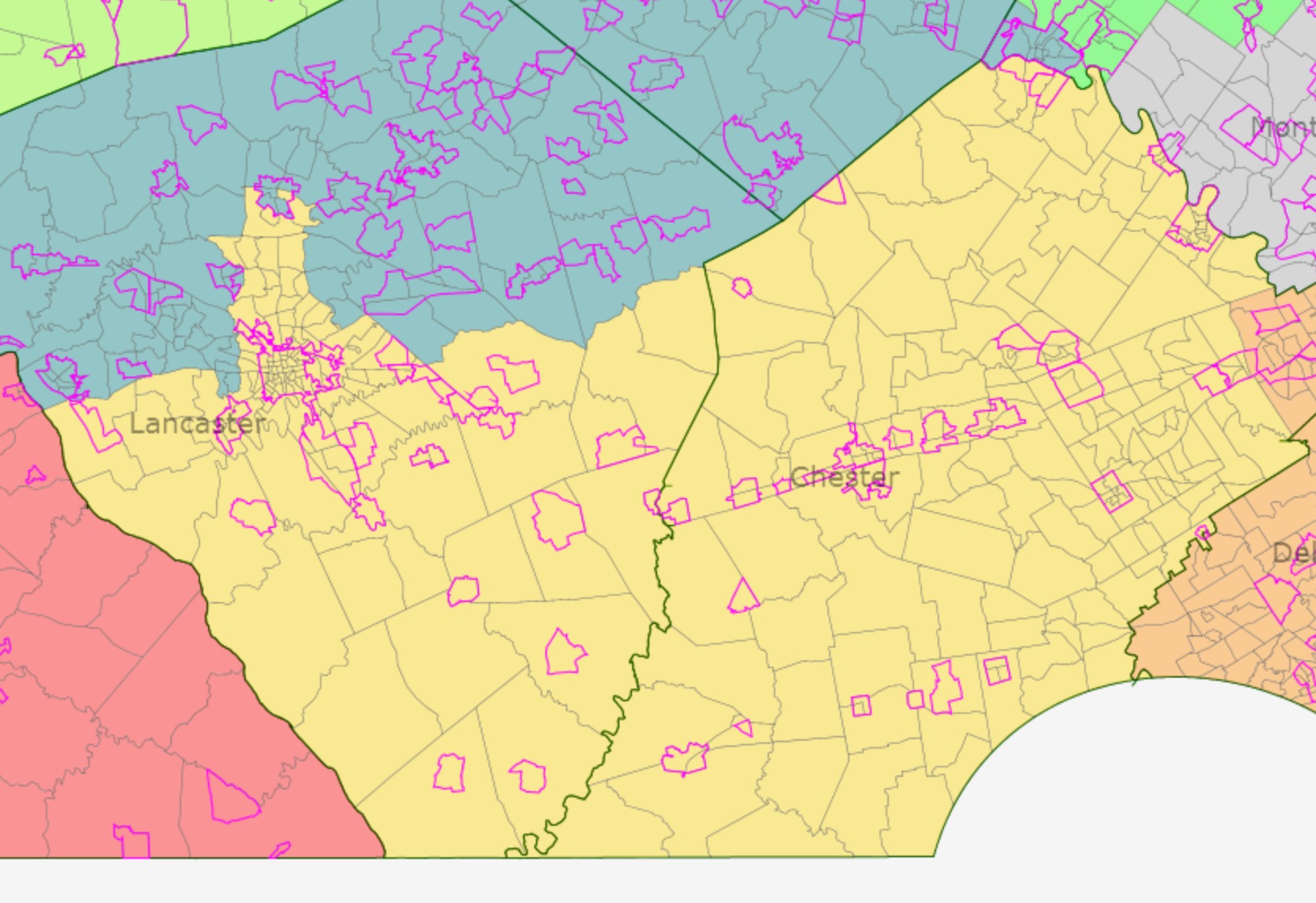 Yet another competitive swing district, with the trends pretty much ensuring it will remain a swing district for the foreseeable future. 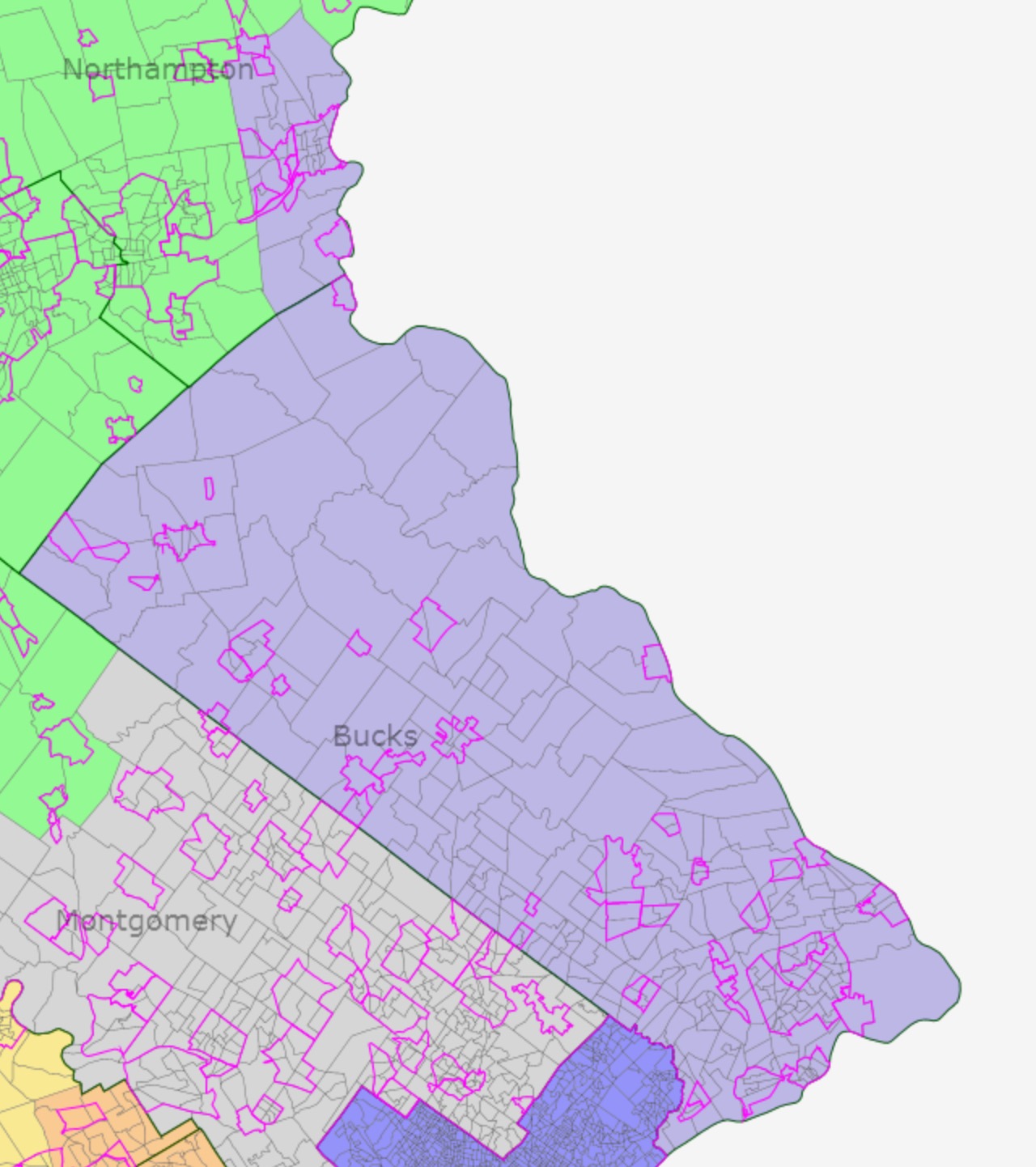 Montgomery County has emerged as a Democratic stronghold in recent election cycles. Pretty straight-forward district encompassing about 80% of the county. 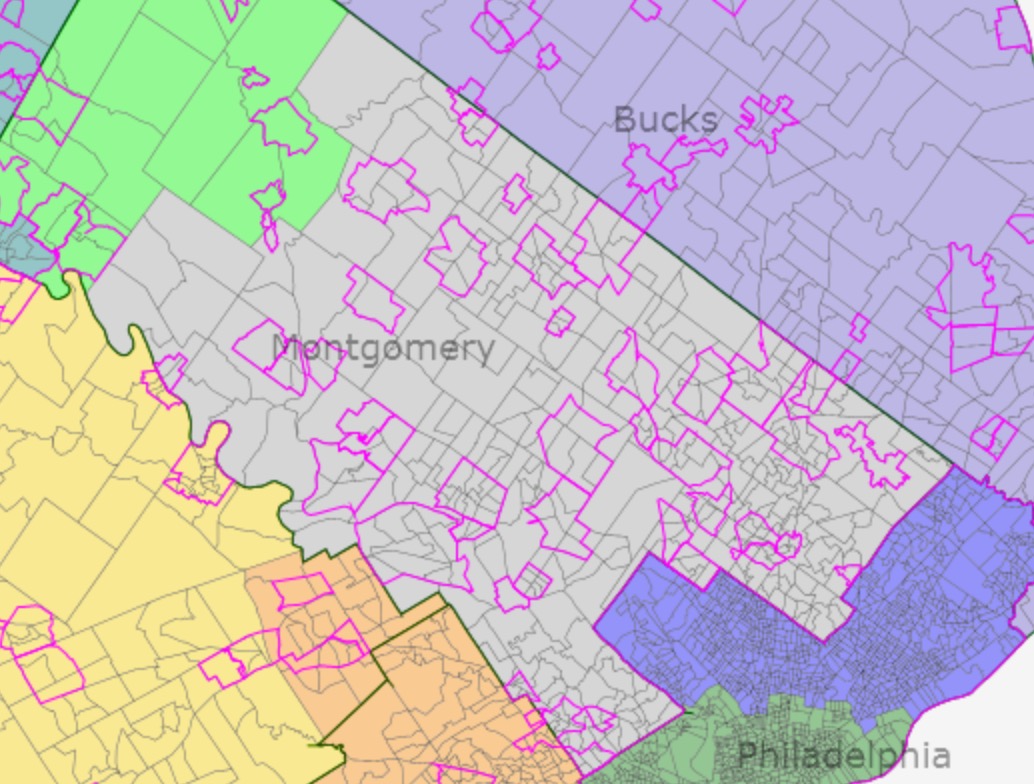 This district is primarily based in Delaware County, with the spillover from Philadelphia included. 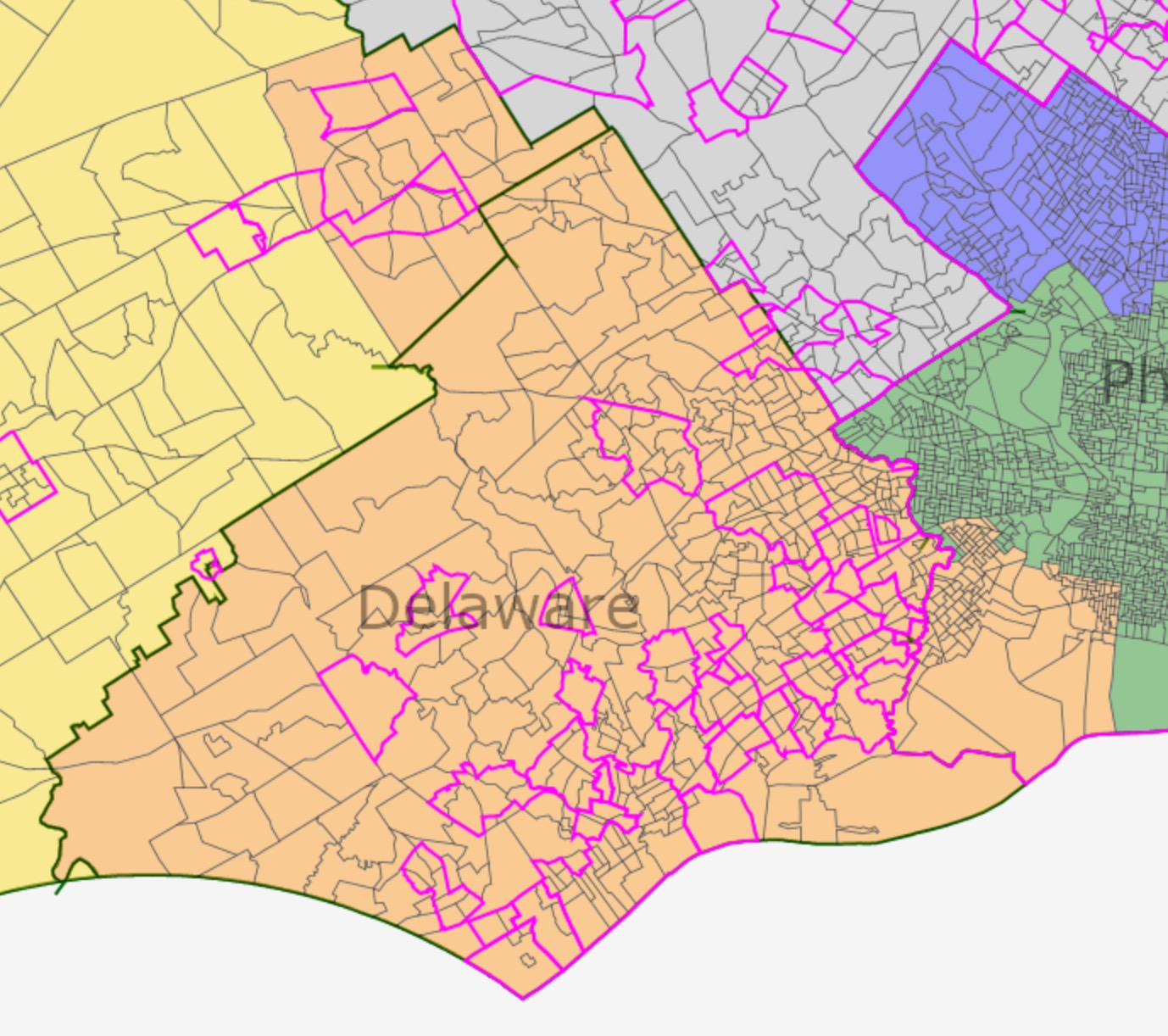 Philly is big and overwhelmingly Democratic (Part I) 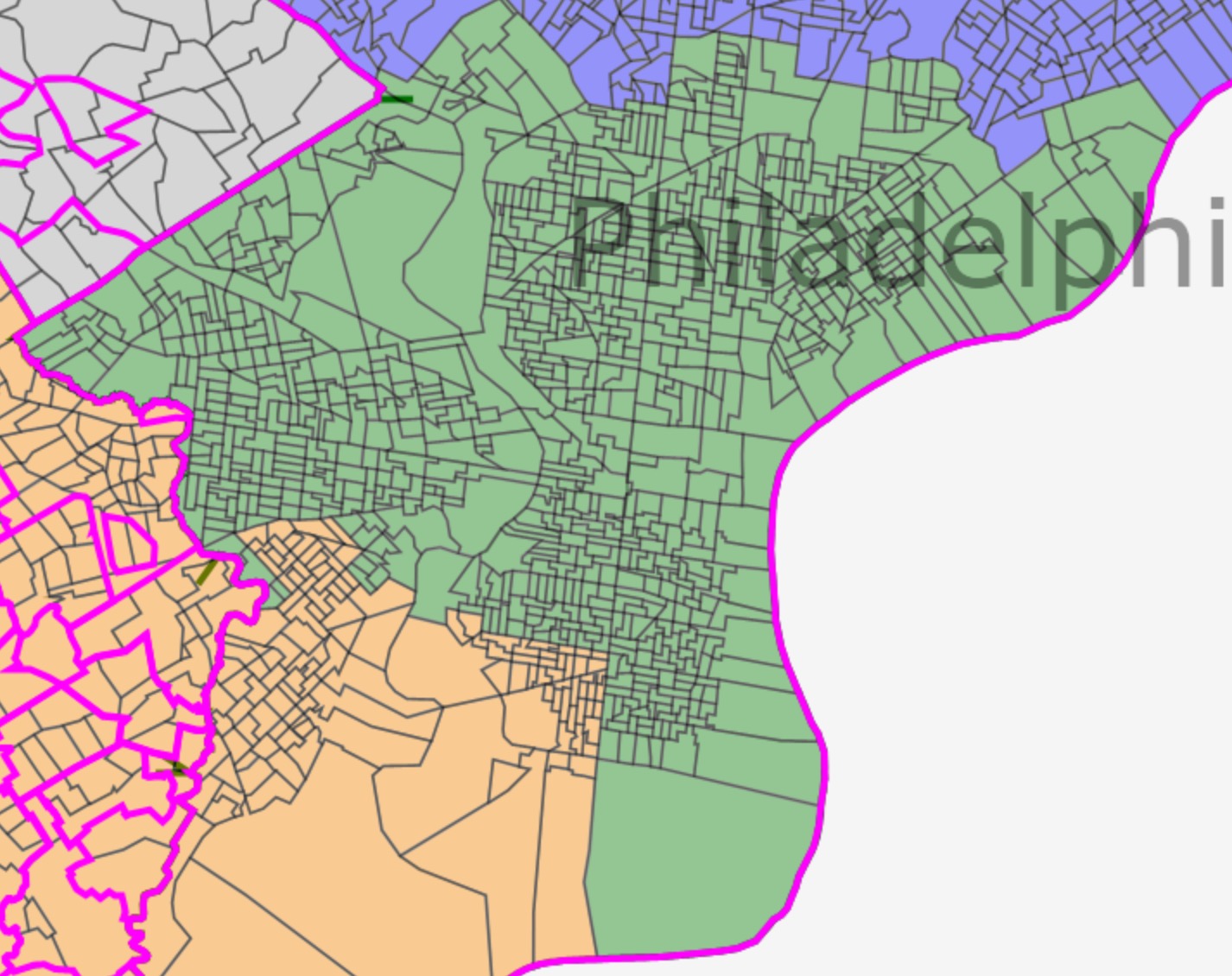 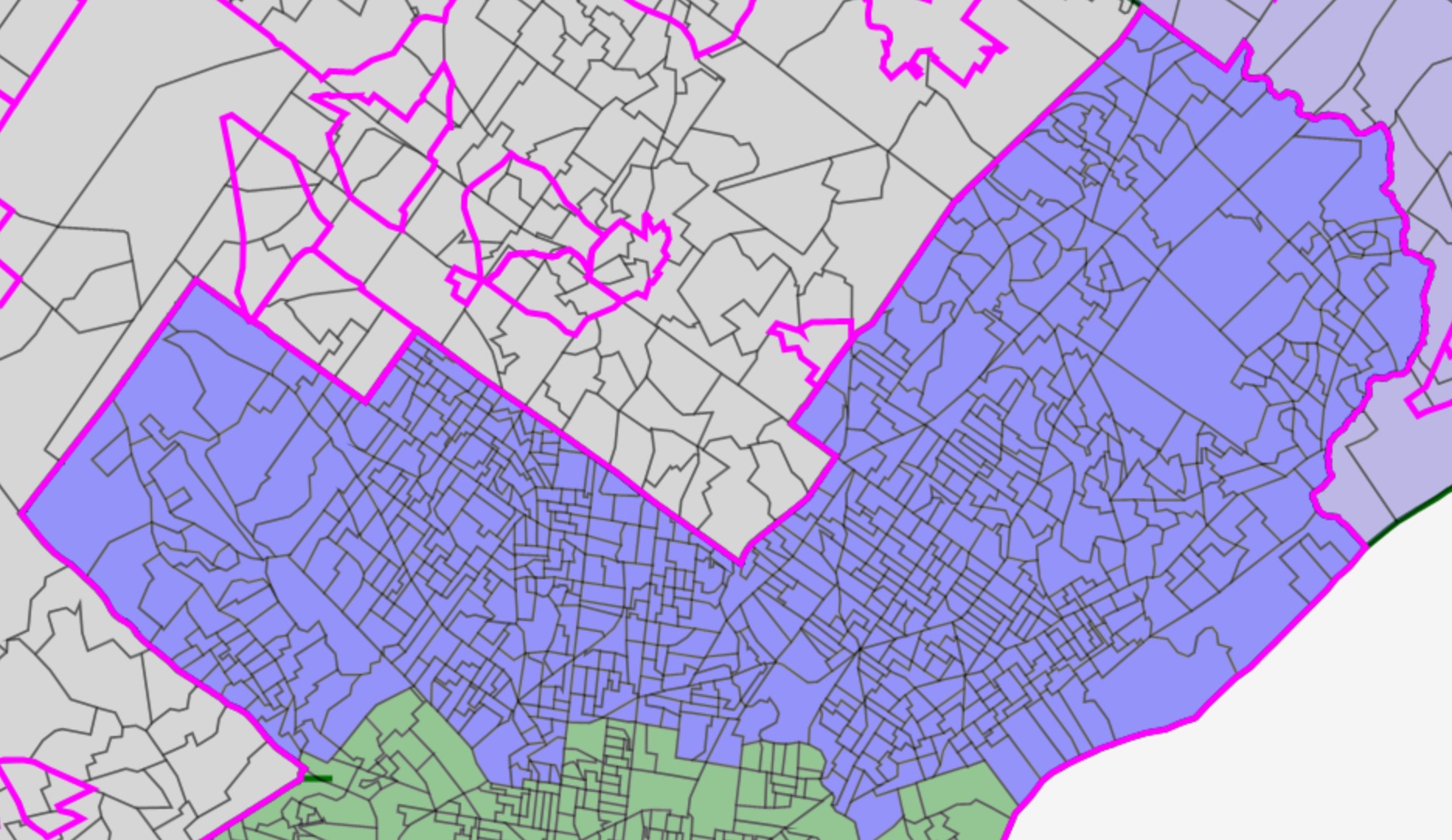 I’m not remotely claiming that these maps should be adopted or are superior in any way; the point is it’s possible to draw new Congressional districts that are fair, objective, and reflective of the population of Pennsylvania. So now that we know it’s possible, let’s sit back and see how the Republicans in the State Legislature tell us it isn’t. 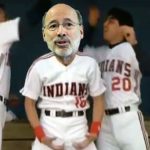 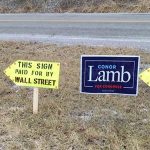